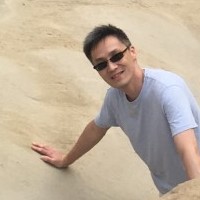 Chuo Chen was born and grew up in Taipei, Taiwan ROC. Fascinated by the beautiful structure of vitamin B12 that Professor Tse-Lok Ho put on the blackboard in his first organic chemistry class, he decided to pursue research in chemistry as career. He was then introduced to the real-world chemical research by Professor Tien-Yau Luh during his last year at National Taiwan University. After finishing the two-year mandatory military service, he went to Harvard to study natural product synthesis with Professor Matthew Shair and got his first taste of research in chemical biology. He then went to learn how to apply his knowledge in chemistry to study biology from Professor Stuart Schreiber. He began his indepedent career at UT Southwestern Medical Center in 2004 and is now a Professor in the Department of Biochemistry and a Southwestern Medical Foundation Scholar in Biomedical Research. He is also a cofounder of ImmuneSensor Therapeutics.

Chuo has diverse interests in chemical and biological researches. He exploited the power of photochemistry and radical chemistry in his early work to solve problems associated with the synthesis of complex natural products. Examples include applying photo-Nazarov cyclization to nakiterpiosin synthesis and mangenese-mediated oxidative radical cyclization to massadine synthesis. He is now seeking to build an enzyme-based platform for catalyst development.

Chuo’s research is also heavily influenced by the new biology discovered in his colleagues’ labs at UT Southwestern. He worked with Professor Lawrence Lum (now at Loxo Oncology) to develop the first small-molecule Wnt inhibitors. He also worked with Professor James (Zhijian) Chen to elucidate the molecular structure of cGAMP. He is now learning various tools in molecular and cell biology to study the Wnt and cGAS-STING signaling pathways.

In his spare time, Chuo likes to cook and bake with his wife and his children. He also tries to learn R and Python to prove that he is not an old dog yet. However, he is not a good coder and never a successful garderner.